Societal Collapse at the corner?

Societal Collapse at the corner? 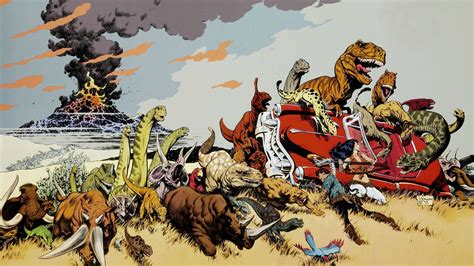 A remarkable new study by a director at one of the largest accounting firms in the world has found that a famous, decades-old warning from MIT about the risk of industrial civilization collapsing appears to be accurate based on new empirical data.

As the world looks forward to a rebound in economic growth following the devastation wrought by the pandemic, the research raises urgent questions about the risks of attempting to simply return to the pre-pandemic ‘normal.’

In 1972, a team of MIT scientists got together to study the risks of civilizational collapse. Their system dynamics model published by the Club of Rome identified impending ‘limits to growth’ (LtG) that meant industrial civilization was on track to collapse sometime within the 21st century, due to overexploitation of planetary resources.

The controversial MIT analysis generated heated debate, and was widely derided at the time by pundits who misrepresented its findings and methods. But the analysis has now received stunning vindication from a study written by a senior director at professional services giant KPMG, one of the 'Big Four' accounting firms as measured by global revenue.

The study was published in the Yale Journal of Industrial Ecology in November 2020 and is available on the KPMG website. It concludes that the current business-as-usual trajectory of global civilization is heading toward the terminal decline of economic growth within the coming decade—and at worst, could trigger societal collapse by around 2040.

The study represents the first time a top analyst working within a mainstream global corporate entity has taken the ‘limits to growth’ model seriously. Its author, Gaya Herrington, is Sustainability and Dynamic System Analysis Lead at KPMG in the United States. However, she decided to undertake the research as a personal project to understand how well the MIT model stood the test of time.

The study itself is not affiliated or conducted on behalf of KPMG, and does not necessarily reflect the views of KPMG. Herrington performed the research as an extension of her Masters thesis at Harvard University in her capacity as an advisor to the Club of Rome. However, she is quoted explaining her project on the KPMG website as follows:

“Given the unappealing prospect of collapse, I was curious to see which scenarios were aligning most closely with empirical data today. After all, the book that featured this world model was a bestseller in the 70s, and by now we’d have several decades of empirical data which would make a comparison meaningful. But to my surprise I could not find recent attempts for this. So I decided to do it myself.”

Titled ‘Update to limits to growth: Comparing the World3 model with empirical data’, the study attempts to assess how MIT’s ‘World3’ model stacks up against new empirical data. Previous studies that attempted to do this found that the model’s worst-case scenarios accurately reflected real-world developments. However, the last study of this nature was completed in 2014. 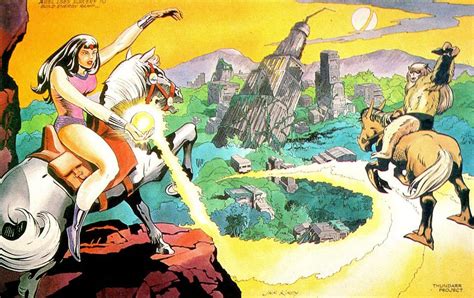 The risk of collapse

“BAU2 and CT scenarios show a halt in growth within a decade or so from now,” the study concludes. “Both scenarios thus indicate that continuing business as usual, that is, pursuing continuous growth, is not possible. Even when paired with unprecedented technological development and adoption, business as usual as modelled by LtG would inevitably lead to declines in industrial capital, agricultural output, and welfare levels within this century.”

Study author Gaya Herrington told Motherboard that in the MIT World3 models, collapse “does not mean that humanity will cease to exist,” but rather that “economic and industrial growth will stop, and then decline, which will hurt food production and standards of living… In terms of timing, the BAU2 scenario shows a steep decline to set in around 2040.” 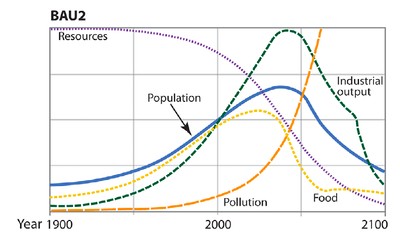 The end of growth?

In the comprehensive technology (CT) scenario, economic decline still sets in around this date with a range of possible negative consequences, but this does not lead to societal collapse. 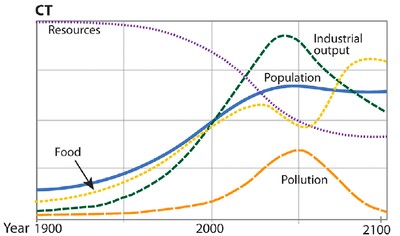 Unfortunately, the scenario which was the least closest fit to the latest empirical data happens to be the most optimistic pathway known as ‘SW’ (stabilized world), in which civilization follows a sustainable path and experiences the smallest declines in economic growth—based on a combination of technological innovation and widespread investment in public health and education. 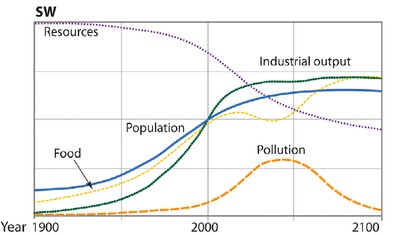 Although both the business-as-usual and comprehensive technology scenarios point to the coming end of economic growth in around 10 years, only the BAU2 scenario “shows a clear collapse pattern, whereas CT suggests the possibility of future declines being relatively soft landings, at least for humanity in general.”

Both scenarios currently “seem to align quite closely not just with observed data,” Herrington concludes in her study, indicating that the future is open.

A window of opportunity

While focusing on the pursuit of continued economic growth for its own sake will be futile, the study finds that technological progress and increased investments in public services could not just avoid the risk of collapse, but lead to a new stable and prosperous civilization operating safely within planetary boundaries. But we really have only the next decade to change course.

“At this point therefore, the data most aligns with the CT and BAU2 scenarios which indicate a slowdown and eventual halt in growth within the next decade or so, but World3 leaves open whether the subsequent decline will constitute a collapse,” the study concludes. Although the ‘stabilized world’ scenario “tracks least closely, a deliberate trajectory change brought about by society turning toward another goal than growth is still possible. The LtG work implies that this window of opportunity is closing fast.”

In a presentation at the World Economic Forum in 2020 delivered in her capacity as a KPMG director, Herrington argued for ‘agrowth’—an agnostic approach to growth which focuses on other economic goals and priorities.

“Changing our societal priorities hardly needs to be a capitulation to grim necessity,” she said. “Human activity can be regenerative and our productive capacities can be transformed. In fact, we are seeing examples of that happening right now. Expanding those efforts now creates a world full of opportunity that is also sustainable.”

She noted how the rapid development and deployment of vaccines at unprecedented rates in response to the COVID-19 pandemic demonstrates that we are capable of responding rapidly and constructively to global challenges if we choose to act. We need exactly such a determined approach to the environmental crisis.

“The necessary changes will not be easy and pose transition challenges but a sustainable and inclusive future is still possible,” said Herrington.

The best available data suggests that what we decide over the next 10 years will determine the long-term fate of human civilization. Although the odds are on a knife-edge, Herrington pointed to a “rapid rise” in environmental, social and good governance priorities as a basis for optimism, signalling the change in thinking taking place in both governments and businesses. She told me that perhaps the most important implication of her research is that it’s not too late to create a truly sustainable civilization that works for all.

https://www.vice.com/en/article/z3xw3x/new-research-vindicates-1972-mit-prediction-that-society-will-collapse-soon
- I rent this space for advertising