Workers found a plane at the bottom of a California lake, possibly solving a 56-year-old mystery

Workers found a plane at the bottom of a California lake, possibly solving a 56-year-old mystery 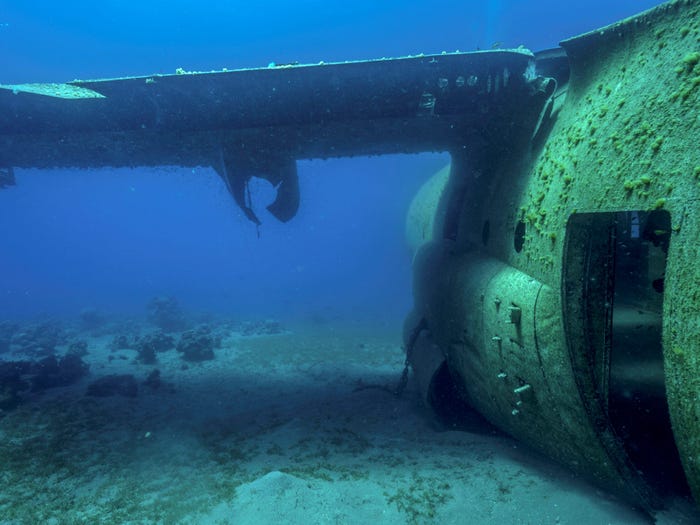 The wreckage of a small airplane was found deep underwater in a California lake as workers were testing surveying equipment, CNN reported.

The wreckage in California's Folsom Lake could likely be the remains of a plane that crashed in 1965, possibly solving a 56-year-old mystery.

Jeff Riley, an environmental technician at Seafloor Systems, a surveying company that specializes in mapping marine areas, told CNN that the plane could be seen on solar imaging about 160 feet below the surface, covered in a thick layer of silt.

KCRA reported that a remote camera was sent down and took pictures of the plane's tail and propeller, and that the plane seemed to be mostly intact.

Seafloor Systems wasn't able to specifically identify the plane, but a plane did crash around the lake on New Year's Day 56 years ago and was never recovered, KCRA reported.

Riley told CNN that the images of the propeller and tail matched that of said plane. The bodies of three people on that flight were never recovered.

Data from a surveying boat indicated that something could be that deep underwater since water levels at the lake are low because of the drought season, CNN reported.

The plane — which was carrying four people, including pilot Ford Marshall, 50; his brother, James Marshall, 51; Helen Gotcher; and Glen Emick, a 15-year-old local high-school football player — crashed after a midair collision at an altitude of 3,000 feet with another plane, The Sacramento Bee reported.

The Bee reported that an eyewitness said the plane "fell like a rock."

The body of the pilot was recovered, but the bodies of the other three passengers weren't. The other plane was damaged but remained in the air until it was able to land safely at what is now Sacramento Executive Airport, The Bee reported.

Authorities had previously tried to search for the plane in 2014 but were unsuccessful, KCRA reported.

Source https://www.insider.com/plane-crashed-1965-likely-found-bottom-of-california-lake-2021-6
- I rent this space for advertising