So today I took my sister-in-law to Toronto so she could vote in the next election (mandatory, even if you live in Canada)

Very interesting. A lineup of Brazilians all the way around the block, this was like 1/8th of it: 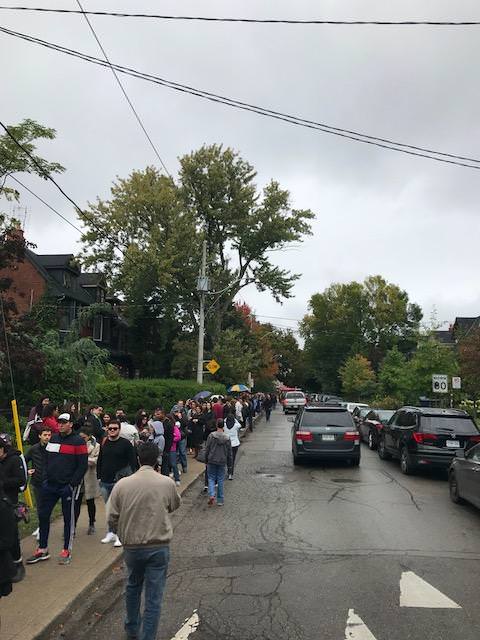 Apparently the country is totally split into Right vs Left, the leftist party (PT) basically offering a full on Socialist state which the rich fear will go the way of Venezuela etc... and the right which is basically an extreme dictator type who says he will use the military to kill all the criminals and end all social welfare which the poor fear will starve them all to death so the rich can prosper.

Here is an article about the Right candidate, he sounds even way more 'alt-right' than Trump, with several truly shocking quotes that would make anyone wonder how any sane person would vote for him... but apparently many brasilians are so fed up with things that he is leading in the polls simply because he offers such an extreme alternative:

Really crazy. The results are gonna come in tonight, I will watch

Do you think this is a natural trend? Or is there some tinfoil possibility behind it where such polarization is being injected into nations systematically?

From the article link above ^^:

"He has a long history of being grossly offensive. He said he would not rape a congresswoman because she was “very ugly”; he said he would prefer a dead son to a gay one; and he suggested that people who live in settlements founded by escaped slaves are fat and lazy."


In spite of these comments, it was my impression from standing in line for over an hour today that most of the people there were gonna vote for him

"This month he was stabbed in the stomach at a rally, which put him in hospital. That only made him more popular—and shielded him from closer scrutiny by the media and his opponents. "


"In addition to his illiberal social views, Mr Bolsonaro has a worrying admiration for dictatorship. He dedicated his vote to impeach Ms Rousseff to the commander of a unit responsible for 500 cases of torture and 40 murders under the military regime, which governed Brazil from 1964 to 1985. Mr Bolsonaro’s running-mate is Hamilton Mourão, a retired general, who last year, while in uniform, mused that the army might intervene to solve Brazil’s problems. Mr Bolsonaro’s answer to crime is, in effect, to kill more criminals—though, in 2016, police killed over 4,000 people."

Edge - care to disclose who you are voting for?

My sister-in-law is looking forward to seeing how the Toronto voters voted, apparently these statistics will be available later tonight

Just based on my online interactions with Brazilians it seems like most of them like Bolsonaro. He seems like a bold leader like Trump who isnt walking on egg shells and instead is defiant to the left. I would vote for him. People have been saying for a long time that if America falls to the radical left it will be Brazil and Russia left to carry on the legacy of Western civilization.

Do you see the trend of hard Right wing candidates popping up and stealing the votes/attention of the media as a natural reaction to failing leftist agendas? Or is this part of some setup to establish another Axis vs Allies global situation?

I think its a natural reaction to a highly successful leftist agenda. In terms of alliances, he who controls fossil fuels controls the world, and America has that on lockdown. To lose her hegemony America would have to have a USSR style collapse.

Masato wrote:Edge - care to disclose who you are voting for?

My sister-in-law is looking forward to seeing how the Toronto voters voted, apparently these statistics will be available later tonight

- Only saw this thread now. My candidat was João Amoedo that i identified more. But i voted on Bolsonaro. Not because i agree or bellieve on everything his say. But because he winning can atract new business to here. Several business have left our country and we are on the biggest crise that i remember.I take how the exterior market can see us and do business with us and the other candidat doesnt strikes me as someone that can atract business to our country!
- I rent this space for advertising