I've also looked at your posts as an admin and the link goes nowhere ..?

Weird, I dont use an image hosting site, I just link where I see them from
People say they all want the truth, but when they are confronted with a truth that disagrees with them, they balk at it as if it were an unwanted zombie apocalypse come to destroy civilization.

I sent the image directly to masato yesterday, I don't want a hosting account. I'm getting cranky in my old age
People say they all want the truth, but when they are confronted with a truth that disagrees with them, they balk at it as if it were an unwanted zombie apocalypse come to destroy civilization.

I don't have an account, I just use imgur for free
https://imgur.com/

What link are you copy/pasting to embed?

This thread has all kinds of juicy leads to explore:

There seems to be a network of Islands/owned property all around Epstein Island. WATER ISLAND supposedly is the location of an old MILITARY SUBMARINE BASE, which means tunnels underground.

Ghislaine Maxwell was known for being a submarine pilot. 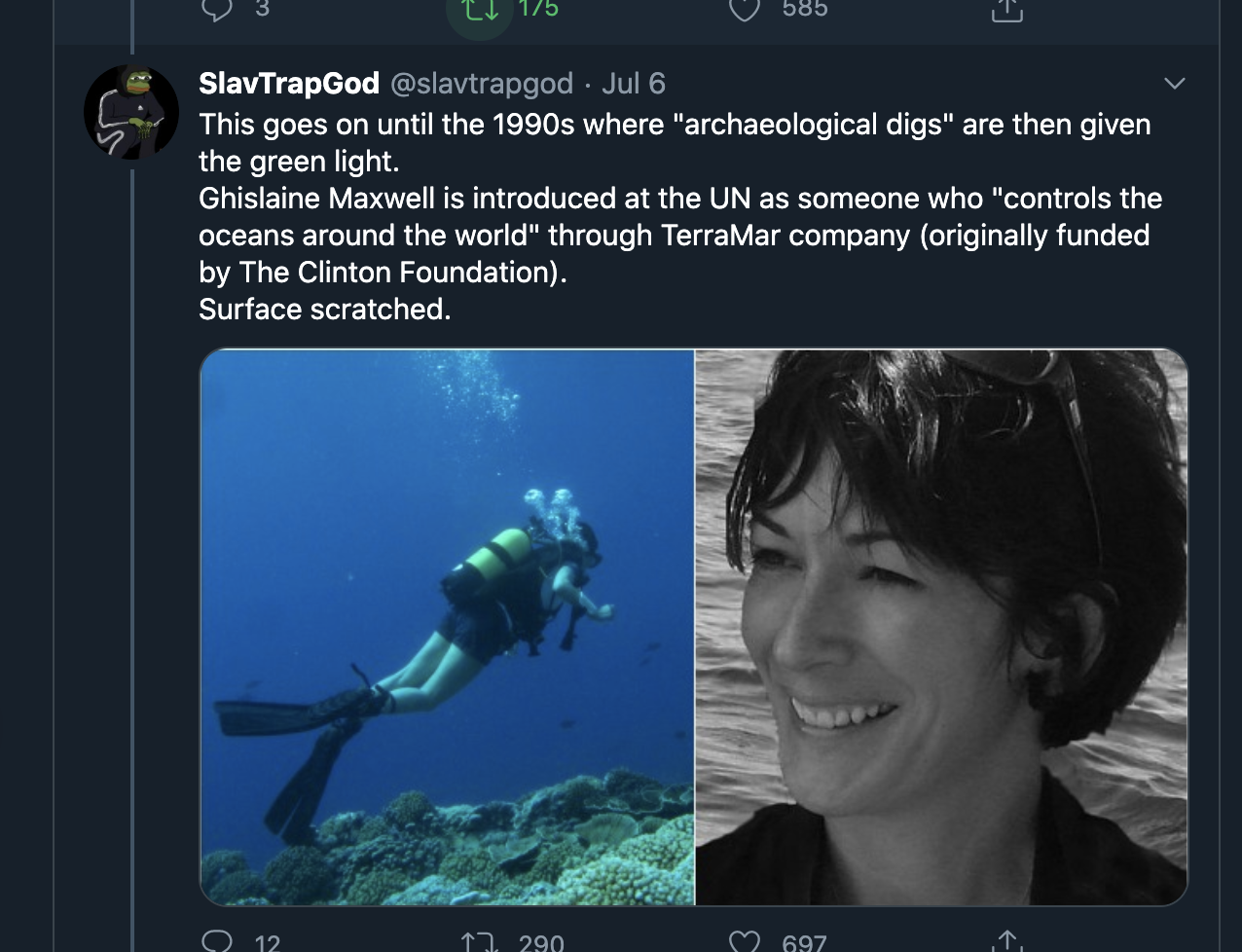 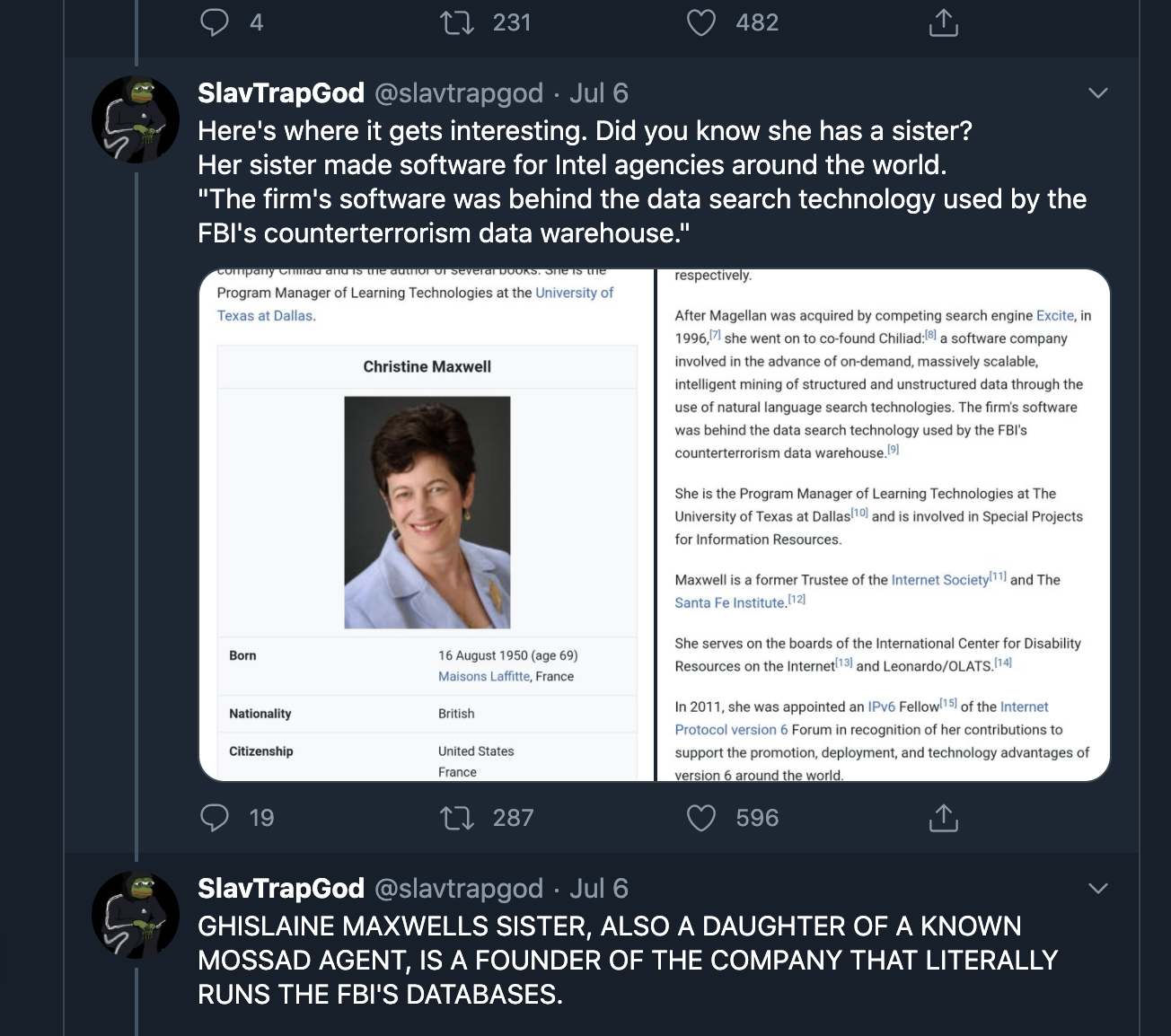 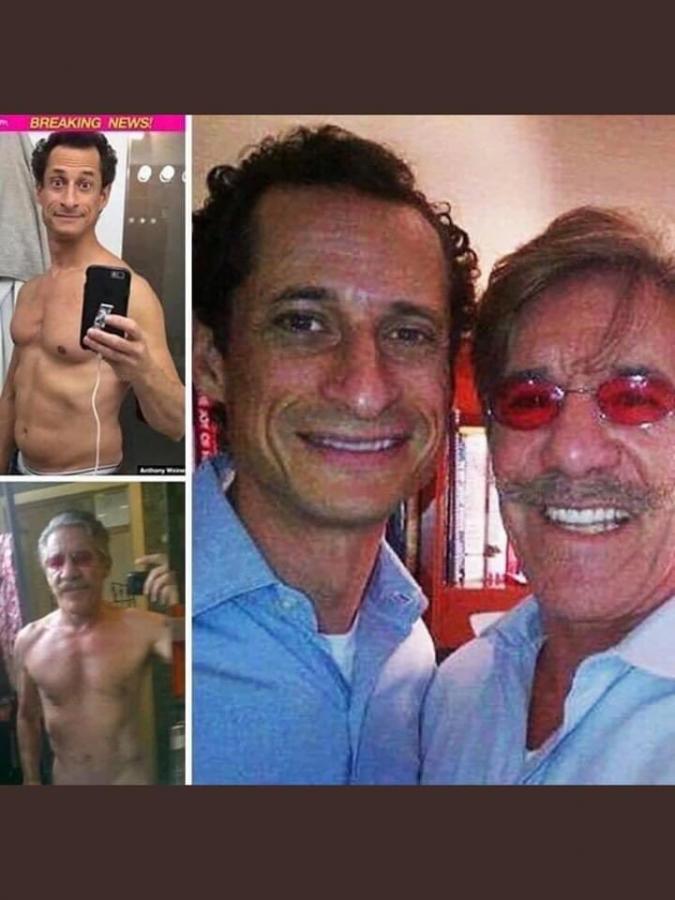 not sure if this will come through or not, they may not have hotlinking available.

https://twitter.com/i/status/1283127778360152064
People say they all want the truth, but when they are confronted with a truth that disagrees with them, they balk at it as if it were an unwanted zombie apocalypse come to destroy civilization.

Canuckster wrote:not sure if this will come through or not, they may not have hotlinking available.

As much as I want to see a round up of everyone involved in this network, we do have to be careful of assuming that everyone who has posed for a photo with someone doesn't necessarily mean they are guilty of the same crimes. We must beware a witchhunt hysteria.

On the other hand, when folks start defending something weird too much, like the MSM reaction to pizzagate for example... how does that Hamlet quote go about 'The lady doth protest too much, methinks'

This will be interesting, we can watch all those still in the spotlight who ARE involved squirm

Who else is bizarrely coming to her defence ?

No one that anyone can find just yet, the mere fact that ZERO journalists are asking questions regarding the seriousness of their involvement in the FBI software and the fact their father is mossad is frightening. These people know exactly which side their bread is buttered on.
People say they all want the truth, but when they are confronted with a truth that disagrees with them, they balk at it as if it were an unwanted zombie apocalypse come to destroy civilization.


You can interact with the torturers for a fee: for example, ask for an arm to be amputated or spill boiling oil on the child's body."

Two Italian teenagers have been accused of paying Bitcoin to watch children be sexually abused, tortured and murdered.

The boy and girl, both 17, became the latest to be arrested as part of Italy's "Operation Delirio". Since its launch in October last year, 19 of the 25 people taken into custody have been under 18. According to Il Messaggero, searches on computer equipment belonging to the two Piedmont teens uncovered evidence they were using the cryptocurrency "to witness live torture of almost any kind, which almost always end with the death of the child." The heinous videos were most likely shot in South East Asia, investigators believe.

They said "services offered" by the so-called "Red Room" sites have differing costs: to watch pre-recorded videos users pay less, but to view the live torture and murder of a child costs significantly more.

Viewers can also interact with the torturers and make live requests for a fee; "for example, ask for an arm to be amputated or spilled boiling oil on the child's body," the publication reported. "Live requests have very significant costs and ensure very high profits for foreign organizations that carry out such inhuman acts," the investigators said, per the site. Police seized cell phones, personal computers, tablets, USB sticks and external memories belonging to the pair.

Searching through communication between them, police claim they discovered "a detailed and disturbing description of their experiences on the deep web". In their texts to each other, authorities said the boy told his friend about the Red Rooms, where videos of executions, murders, dismemberments, sexual acts on animals, organ removals, castrations, and child pornography against very young children could all be viewed.

Images reportedly shared between the two, seized by law enforcement, include pornographic videos self-made by children; videos adults made of minors sexually assaulting children aged between 2 and 4; and gory videos involving Nazi symbology.

Operation Delirio, which has made arrests across 13 different regions in Italy, has not been able to shut the dark websites themselves down, rather focusing on Italian users. The two teens now face charges relating to the distribution of child pornography.
People say they all want the truth, but when they are confronted with a truth that disagrees with them, they balk at it as if it were an unwanted zombie apocalypse come to destroy civilization.

There is too much to ignore.

The fact that it has been ignored so completely for so long should be major red flags. All of this needs to be investigated WIDE open. The question is who can be trusted to do the investigation?

Does there even need to be an investigation? Haven't people all over the world already done all the investigating? What is really stopping these communities from being rounded up? What would it take?

Apparently this video was broadcast after hours late night on the cartoon network's 'Adult Swim'. People defend it saying its for adults and its just for jokes and wacky videos but I can't understand why anyone would even think of this unless maybe someone is trying to blow the whistle. Otherwise I really can't think of any good reason to even come up with such a concept, let alone create it.

Great IMO to see more people finally calling it out. I hope someone lynches that Dan Schneider fucko too