3 years of TOTAL UNRELENTING FOCUS on 'Russiagate', goes poof GONE OVER. No collusion, no evidence. We all saw it was a coverup from the start but the MSM somehow managed to drag that shit out for # FCCKING YEARS

That was the hardest collective media spin/push/attack I have ever seen. Trump has been calling Fake News and enduring the whole way through, now his slate is wiped clean, MSM and Dems have nothing. All their shit has failed. Trump is openly calling out the media coup attempt and saying it can never happen again now or in the future etc

Its really amazing imo, if this is all a scripted drama I give big ups to the script writers, lol
Never seen anything like this.

Here are some good vids I've found about it.
('good' meaning not that I agree with them but just food for info. Fuck Hannity lol WAR Ben Swann

from our man sparkuri, lol 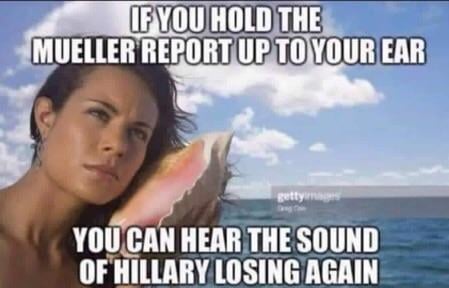 I can't help it

This is such a blow to mainstream media credibility its amazing. THIS is why I cheer most of all. This is a 3 year blunder or calculated self destruction. It was getting so absurd I honestly can't believe they managed to stretch it 3 years, those of us who could see its roots were calling it from day 1.

Now lets see if anyone dares to steer the attention back to where/how this 'Russiagate' all started in the first place.

What other president EVER has the guts/confidence/freedom to talk off the cuff like Trump does?

Content aside, most presidents are all teleprompter readings who have people speak for them and have ear buds in their ears etc. Any interview is a big deal, heavily edited legally written etc they are always over-careful with what they say and how they say it

But not Trump lol he just goes off.

To me that shows either that he really has conviction about what he's doing, or he's a better liar than all the others combined

Either way I find it fascinating. To see the MSM take another 10-8 round is pleasing

maybe even 10-7. Mazzagati would call the TKO

Where can I read the Mueller Report?

As far as I understand, you can't lol

Its being sealed or whatever, people fighting over releasing full or partial parts of it. Supposed to be 3000 pages long or something

Conclusion was no evidence found of collusion, all charges thrown out. Would you really read the whole thing if you could?

Good to see ya Big Ben, you OK?

I wouldn’t read it personally, but there are definitely people that would.

While I accept that Trump probably didn’t collude with Russia directly, it seems to me it wasn’t through a lack of trying.

Now, the question remains, why is the report being withheld? Trump himself has said it should be made public, and if there is nothing to hide there shouldn’t be any reason not to release it. While it isn’t released questions still remain.

One such issue is whether Trump tried to obstruct justice, despite Trump’s claims, he has not been cleared of this. Is this the reason the full report is being withheld? Until it is released we won’t know.

I’m good thanks. Didn’t manage to get away for the meditation retreat. The school changed the end of semester dates on me. I’m exceptionally tired, but for the next few weeks things are a lot simpler, even if they aren’t totally free.
Post Reply
34 posts