So I found out a bit more about the magazine. They are the Finnish equivalent of naturopaths and folk medicine, but being that Finland has a rich folk healing tradition they are more influenced by that and less by Chinese medicine as in the West. I found this website by another group of such healers and they mention that they formed as part of a folklore society in 1996 and have apparently gone on excursions into Karelia to contact surviving folk healers. Looking over their site it seems they do discuss mythology/spirituality and are seemingly influenced by it, though its not central in focus. 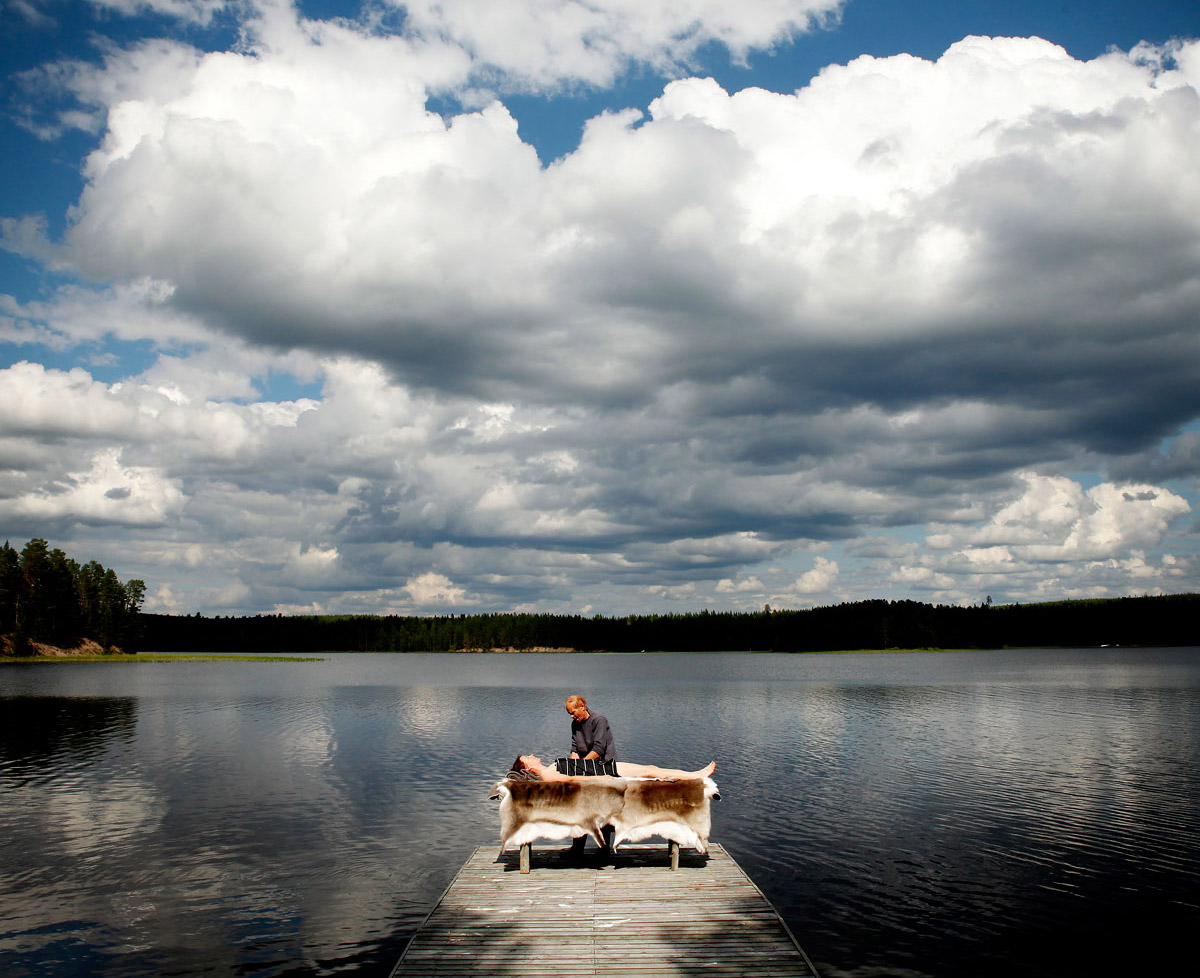 This article seems to give a very brief and probably incomplete history of the research and application of folk medicine by the modern scholarly types:

It seems there was some research done in the 30s, then interest didnt pick up again until the 80s and by the 90s there were new practicioners and a folk medicine magazine. In the 21st century there are apparently only 4 such full time devoted healers.

Jussi Huovinen is aparently the last rune-singer. Here is his story:

Here is a trailer for a movie about a singer girl who became his pupil:

Another runesinger who lived til 2005:

Another movie I gotta watch, on the revivalist movement:

Excellent article on the tietaja Riiko Kallio (1869-1942), who was apparently the last male tietaja(translated as "sage" in the article):

However there is a mention in it that leaves me curious if he was truly the last. The soviet authorities considered him noteworthy because he was also a runesinger, which they regarded as important, unlike lowly sages who did magic. He is actually responsible for the longest single runesong recorded, which discusses the myths of Lemminkainen. From my perspective this seems quite ironic; as a modern researcher I have a movie/documentary that was made about a runesinger who lives in modern times, yet Im wandering in the dark looking for the footsteps of tietajas from 50+ years ago. But the reason I bring the sentiment up is because it seems to reflect a widespread social knowledge of such sages, which would seem unlikely if he was the last male in a nearly dead tradition. Also consider the Germans who reported seeing many such sages just 6 years before Kallio's death. Still, 2 world wars made sure that survival was pretty tough as a man, and to an extent to all. Maybe he was the last. Its a well written well sourced article from a credible publication written in 2009, so there is a good chance he really was the last man to be documented. His death by drowning in a river and his body being then dredged up is eerily similar to the fate of Lemminkainen.

Another interesting fact discussed in the article was how the culture-crushing, nationalism-suppressing atheistic Soviets were actually willing to promote folk culture as long as they were rewritten to be infused with communist ideals, and they commissioned many such rewrittings. I actually remember reading somewhere about how they did this with Turkic tribes too. But what really caught me off guard was the quote describing Vainamoinen, Ilmarinen, and Lemminkainen as "our ancient heroes, and our gods." They probably didnt see folk beliefs as a threat in the same way they did Christianity. It would be interesting to know how long this lasted. I wonder how many kids got to grow up learning the old beliefs because of this vindication. Edit: from later research I know that they did this as a political/diplomatic move because the Finnish nationalists were already using the common heritage and traditions to promote Karelian freedom and the Soviets were fearful that sympathies for Karelia could draw them into a war of a Western power helping Finland invade them.

Found a link to the movie/documentary. I just watched it, it was pretty awesome:

I was able to get in contact with a long-time devoted Finnish folk believer and asked him who the last tietaja was. He says one of the last high profile one was Anni Polonen, but there were others who quietly continued the tradition longer. He explained that the last tietaja who was fully capable of the traditional gifts such as entering an escatic state probably died in the 1960s, as Siikala told him she met one in the 60s. This must have been what she was vaguely refering to in her book. It seems whats going on is that scholars made contact with such people, but it tends not to get mentioned as much, which Im guessing is because less and less traditions were present with these late practicioners. My contact also explained that the families of these late tietajas have also preserved some of the old art to modern times, but again they are quiet about it. The wiki page on Anni Polonen says that her son carried on at least some of her practices into the 1990s, and her granddaughter studied history in university, focusing on her grandmother's profession. I was also warned to be wary of the many fake gurus.

Then earlier today while googling, I hit a jackpot; an article that had audio and video recordings of the old sorcerers. It includes rites being practiced in the 1930s, and a 1965 TV special on spells and magic that interviews some elderly practicioners:

The same site had yet another jackpot article, this one had an audio recording from 1905 of the Karelian poet Petri Shemeikan reciting a spell of fire, a 1965 video of the witch Elmi Tsokkinen in a studio sauna with a realistic baby doll performing a healing ritual on it while chanting spells that mention Vainamoinen, and a 1973 video(!!!) of the elder Karelian Jaakko Köpönen performing a spell against cuts from iron. Both Elmi and Jaakko were from the Karelian town Suoyarvi. About half of these videos are available to download, and frustratingly the coolest ones are not available.

Another article from the site has video from 1976(color!) at a midsummer festival, and another from 1977.

The 1973 video with Jaakko Köpönen performing the spell is cut from a longer video about Karelian traditions and how they are disappearing. He also sings traditional poetry in the video. There is also an interview with the elder poet singer Vasili Peiponen. Apparently back then young people were already only speaking Karelian at home with their families.

I decided to dive into the SKVR equipt with wiktionary, google translate, and a Finnish site for Finnish-English translation. The latest poems/incantations in the database date to 1939, the year the Soviet Union invaded Finland in WW2. I went looking for poems/incantations that talk about Ukko and focused on the 1930s. I found a lot that seem to literally translate as come to the oven or out from the oven or something like that and I remember Siikala explaining what this was in her book but I forget exactly. Its something about healers trying to translocate spirits iirc. I was also concerned that I might just be finding poems talking about a literal ukko(old respected man) but I found a rabbit hunting poem/incantation from 1936 that quite explicitly calls him taivaan Jumala - "God of the sky." Note syncretism with Sky Father and Christian god. Taivaan is taivas in nominative form, from proto-balto-slavic deiwas = IE Dyeus Phater.

I've been trying to find Laulu/Song online for free with no luck, but the bonus features/extras have been put online and they are already amazing me. I cant wait to watch the full movie:

And if you were ever wondering the origins of the cunt:

The makers of Laulu have it on Vimeo in HD, you can pay 6 buck to rent it for a week or 22 to download it in HD. I went ahead and bought it, well worth it. It wasnt what I was expecting thought. Its very much about the woman and her personal journey. They never interview him about his views on Kalevala or anything. I still really liked it though, half the movie is just them hanging out and playing songs.

I found some evidence for revivalism in the early 20th century. There was an association called the Kalevala society/foundation devoted to the old culture: https://fi.wikipedia.org/wiki/Kalevalaseura

And from it there emerged a group who wanted to build a "Kalevala house" which was supposed to be 80 metres tall, have a massive book as an altar, and have statues of all the old gods. It was supposed to have a presence of holiness to those who entered. While this project failed, it shows that these people went a full step further than the Victorians who romanticized Greek mythology and put statues of Venus in their gardens. There was a passion and authenticity to their belief and conviction. https://fi.wikipedia.org/wiki/Kalevalatalo

The main guy leading the charge for this was Alpo Sailo, a sculptor who made many sculptures of the great rune poets. He lived until 1955. https://fi.wikipedia.org/wiki/Alpo_Sailo

Somewhat of a Swedish parallel to the tietaja stuff: https://en.wikipedia.org/wiki/Cyprianus