So a little while ago, this documentary about Coronavirus was circulating EVERYWHERE, I don't know how they got their search engine algorhythyms to work so well but it was totally not an accident. The doc was a high production value, big budget, professionally made 'investigative' documentary coming to all kinds of conclusions... yet right in the very early stages of the pandemic where nobody really knows shit yet lol

I wont post the vid because it doesn't deserve it, but basically the WHOLE documentary was a massive 'Blame it on China' hitpiece, openly calling for war, with thick rhetoric of "CCP oppression evil" VS "USA freedom good".

The makers of the documentary? EPOCH TIMES.


Now, April 30 2020, I receive a newspaper in my mailbox that I've never received before - the EPOCH TIMES.

I only imagine that I'm not the only one who received this free paper today, likely millions of homes nationwide/(worldwide?) received one too.

What is this trash? I hope to god the majority of those millions of homes has the eyes to recognize that this is not their daily 'newspaper' to be read and believed over morning coffee.

Just read the tone of these 'articles'. quotes and bylines - how hyper-inflated, irresponsibly un-professional, how war-mongering: 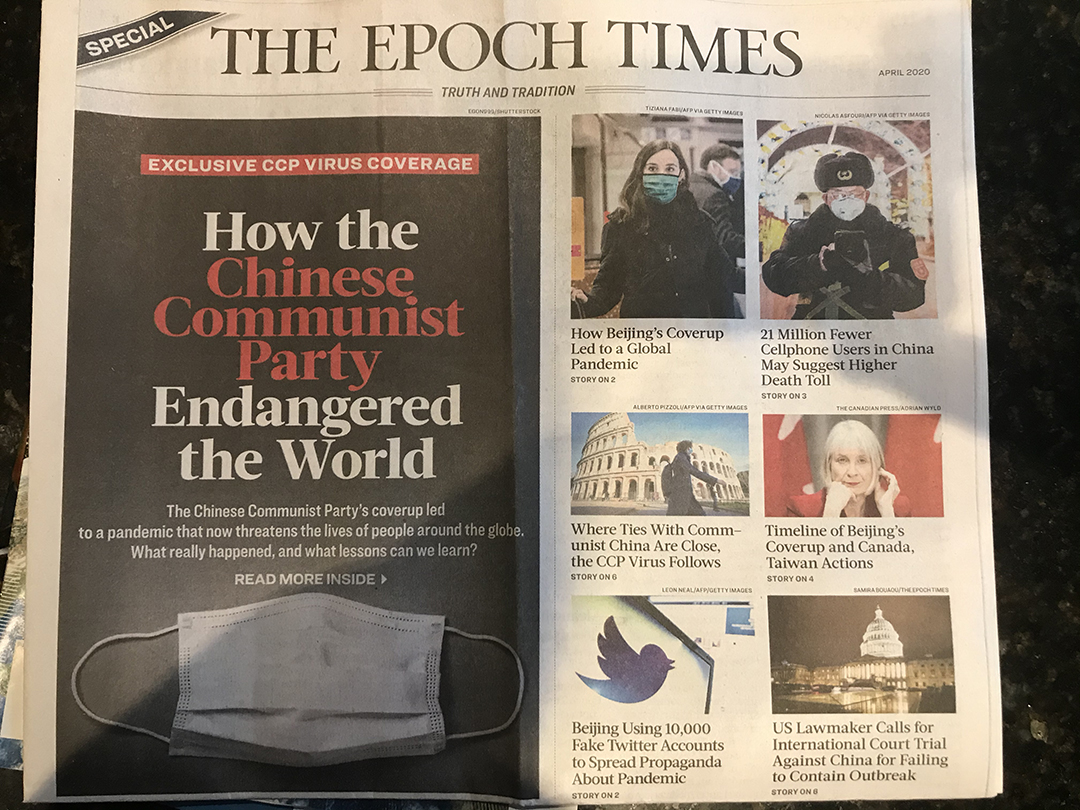 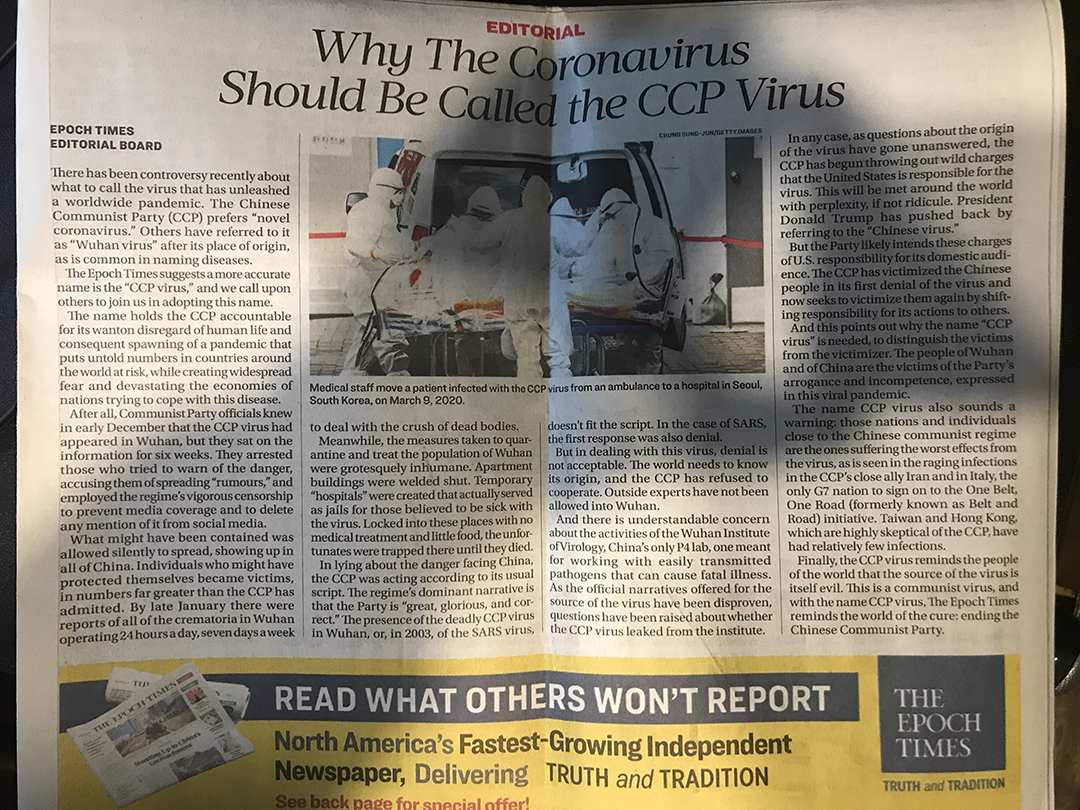 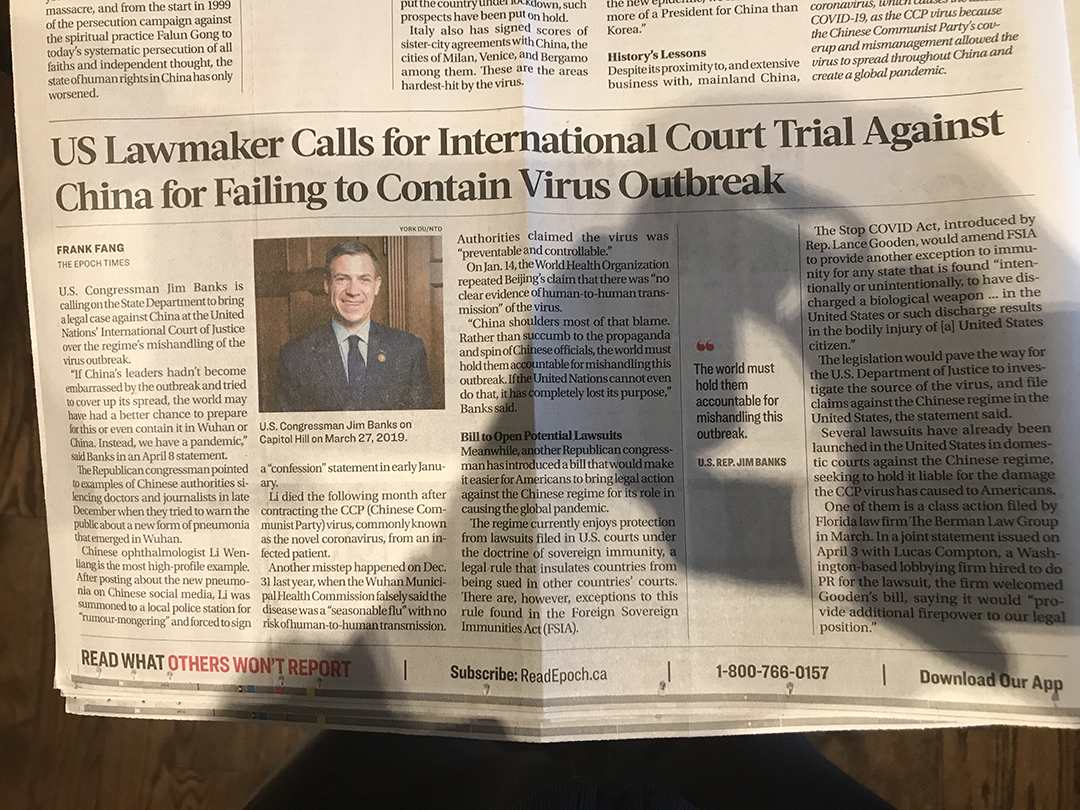 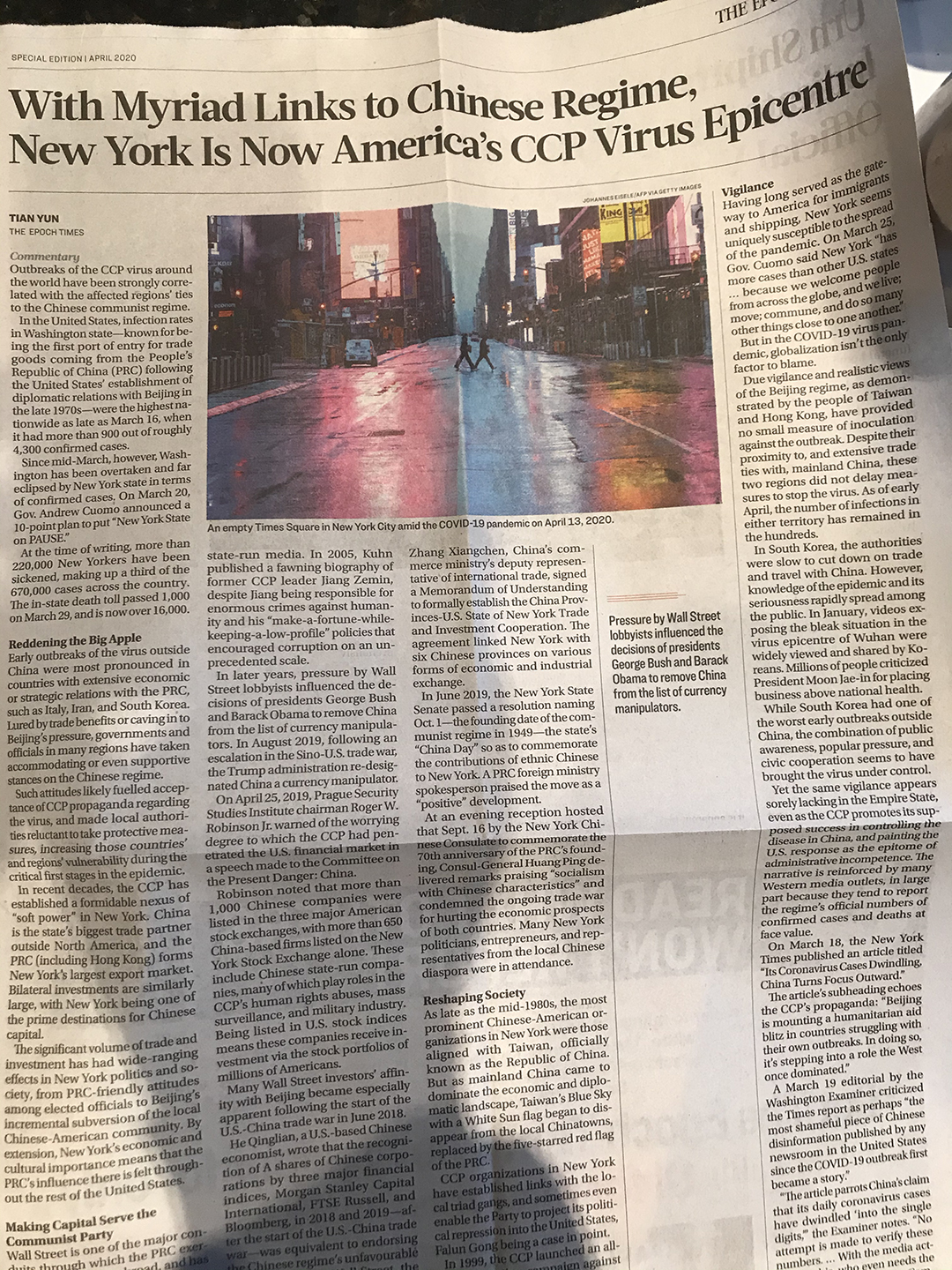 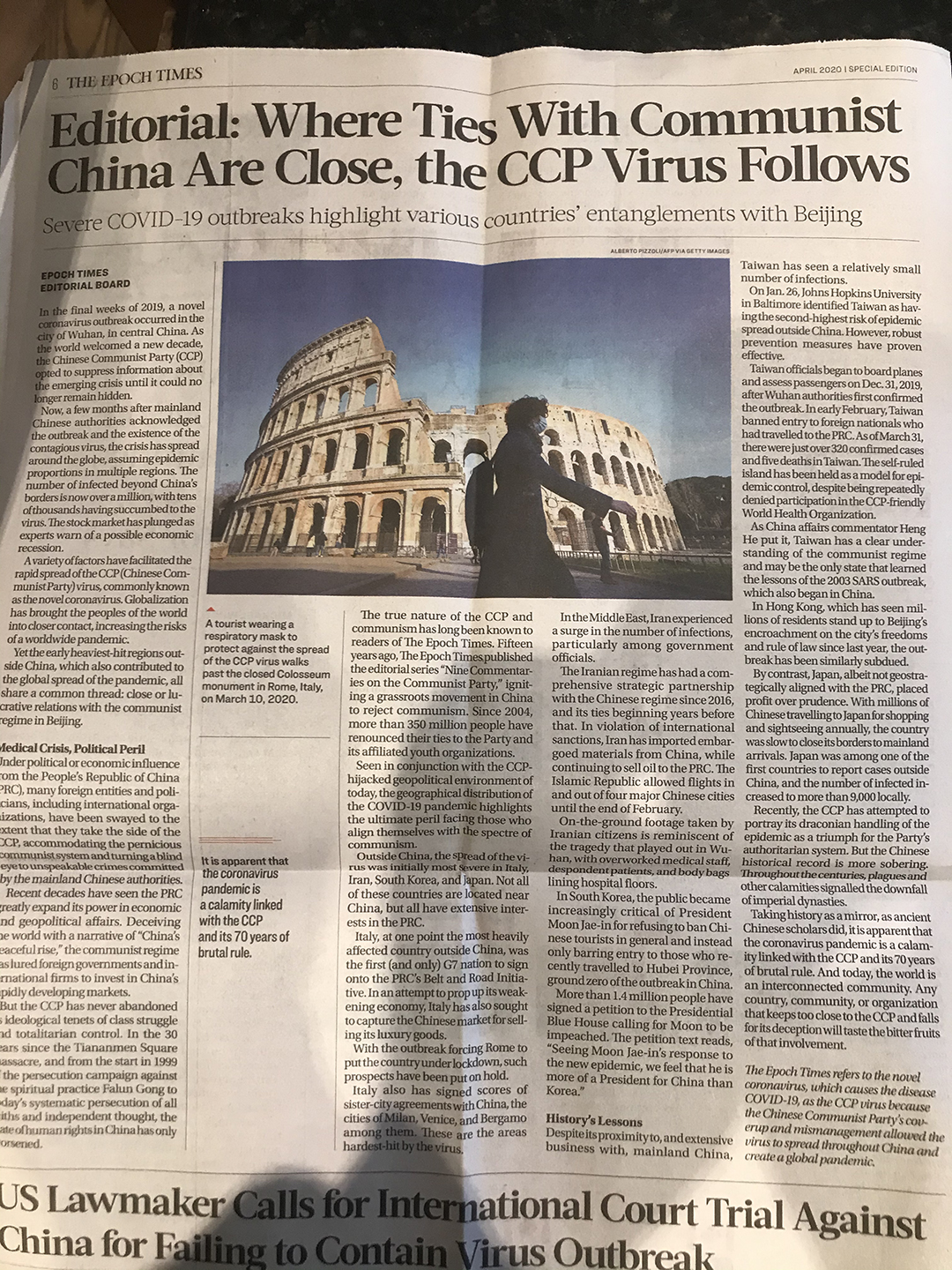 THE FUNNIEST ONE lol: 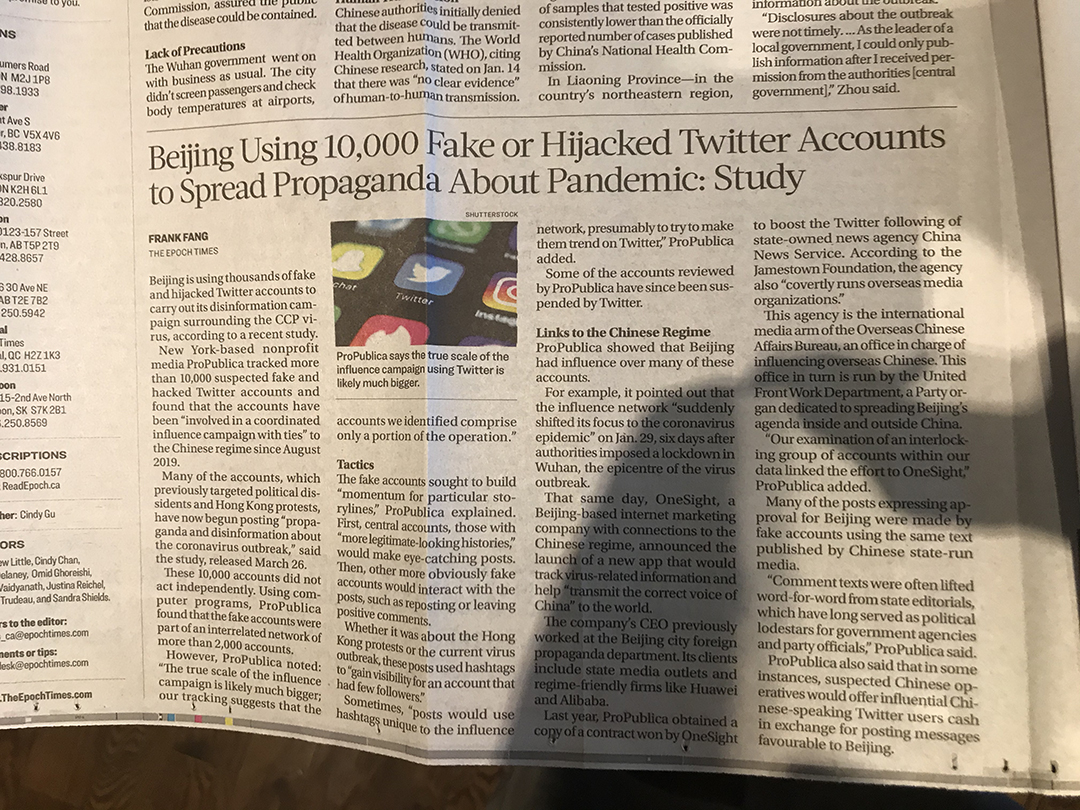 The irony is that they absolutely omit the facts that American orgs, Bill Gates, and Anthony Fauci himself has DIRECT ties and investments to the very lab that they keep pointing the finger at.

I am looking forward to digging a little deeper on this Epoch Times, who is behind it, what connections they have. 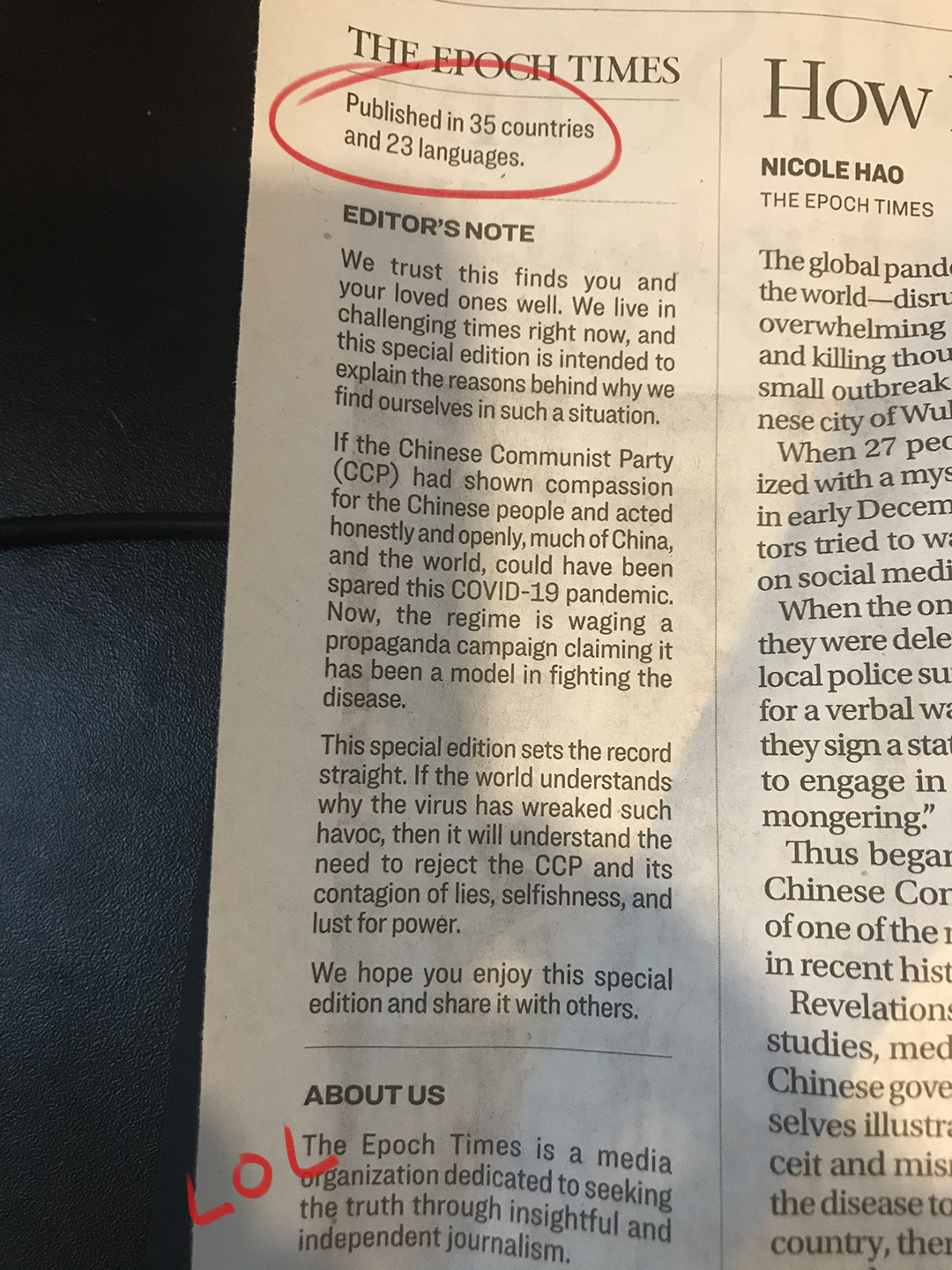 There are ZERO ads in the entire publication. Not one ad, aside for Epoch Times promos.

The entire paper front from to back is a call for war vs China, at a time WAY before all the facts and dust has settled.

I have to say I agree with your assessment
People say they all want the truth, but when they are confronted with a truth that disagrees with them, they balk at it as if it were an unwanted zombie apocalypse come to destroy civilization.

Canuckster wrote:I have to say I agree with your assessment

Did you get one in your mailbox?

No I did not
People say they all want the truth, but when they are confronted with a truth that disagrees with them, they balk at it as if it were an unwanted zombie apocalypse come to destroy civilization.

They have an office here in Hong Kong. They are also very pro HK protests. Last year, masked men, probably triads hired by ccp, set the place on fire. This was during the height of the protests... Last fall?

Wikipedia says they're associated w/ Falun Gong. An oppressed group in China known for their practice of a moving meditation that resembles tai chi.

Their beef with CCP seems entirely justified but their journalistic enterprise maybe lacks the ability to see the forest for the trees.

"Falun Gong is a modern qigong discipline combining slow-moving exercises and meditation with a moral philosophy centered on the tenets of truthfulness, compassion and tolerance. It was founded by Li Hongzhi, who introduced it to the public in May 1992 in Changchun, Jilin. Following a period of rapid growth in the 1990s, the Communist Party launched a campaign to "eradicate" Falun Gong on 20 July 1999...

The campaign was driven by large-scale propaganda through television, newspaper, radio and Internet. There are reports of systematic torture, illegal imprisonment, forced labor, organ harvesting and abusive psychiatric measures, with the apparent aim of forcing practitioners to recant their belief in Falun Gong...

Foreign observers estimate that hundreds of thousands and perhaps millions of Falun Gong practitioners have been detained in "re-education through labor" camps, prisons and other detention facilities for refusing to renounce the spiritual practice...

In 2006, allegations emerged that many Falun Gong practitioners had been killed to supply China's organ transplant industry. An initial investigation found that "the source of 41,500 transplants for the six year period 2000 to 2005 is unexplained" and concluded that "there has been and continues today to be large scale organ seizures from unwilling Falun Gong practitioners"."

30 minutes in they talk about Epoch Times.