You are right though that's not the same slime company. Good find though, that's twisted

But still, I am scratching my head as to WTF the guy is doing making slime and selling on ebay under an alias...

I suppose you could argue that he's trying to escape the controversy of the Hampstead case, difficult to keep living under the same name when you've been accused of such things. Maybe he just created an alias to build a new life

But here is one possibility to consider:

"In the e bay runner up descriptions it says, GAB AND HIS CHILDREN RUN AN E BAY STORE SELLING HAND MADE SLIME TOYS. THEY HAVE ALREADY EXPORTED TO 15 COUNTRIES AND HAVE HOSTED SLIME PARTIES FOR 70 plus CHILDREN SUFFERING FROM CANCER AND OTHER DEBILITATING DESEASES"

Could the business be a cover for hosting kids parties and getting access to children?

I'm trying to find out what the guy did under the name Ricky Dearman... they called him an 'Actor', he has an IMDB page but its really limited, just a few lame low budget scenes, he's a really bad actor lol as anyone could tell from his BBC interview where he pretended to cry (no tears) and plead his innocence

Here he is under ANOTHER apparent alias Richard Ford, WTF:

Co-Founder of Tween YouTube Channel Arrested for Molesting a Minor

The co-founder of the popular YouTube channel SevenAwesomeGirls was arrested after being accused of molesting a girl “under the age of 16”.
People say they all want the truth, but when they are confronted with a truth that disagrees with them, they balk at it as if it were an unwanted zombie apocalypse come to destroy civilization.

MI5 files have revealed for the first time what many suspected. Margaret Thatcher was aware of alleged sexual offences by her Private Parliamentary Secretary Sir Peter Morrison yet chose to defend him.

Testimony as well as documents MI5 have handed to the Independent Inquiry into Child Sexual Abuse (IICSA) suggest a rallying behind the Conservative minister despite concerns laid out about Morrison’s “interest in small boys”.

He was one of Thatcher’s most faithful allies, persuading her to stand for the party leadership in 1975. Morrison was knighted in 1991 and died in 1995.

The IICSA is probing how the Conservative Party and secret services dealt with allegations of child sex abuse made against Sir Peter Morrison. He was never charged with the allegations levelled against him.

The MI5 files suggest then PM Thatcher knew of the allegations against him.

In a memo from 1986, revealed to the inquiry yesterday, Eliza Manningham-Buller, who later became director general of MI5, wrote that she met Morrison and regarding the allegations against him, she reported that “the prime minister was aware of it and was supporting Peter.” 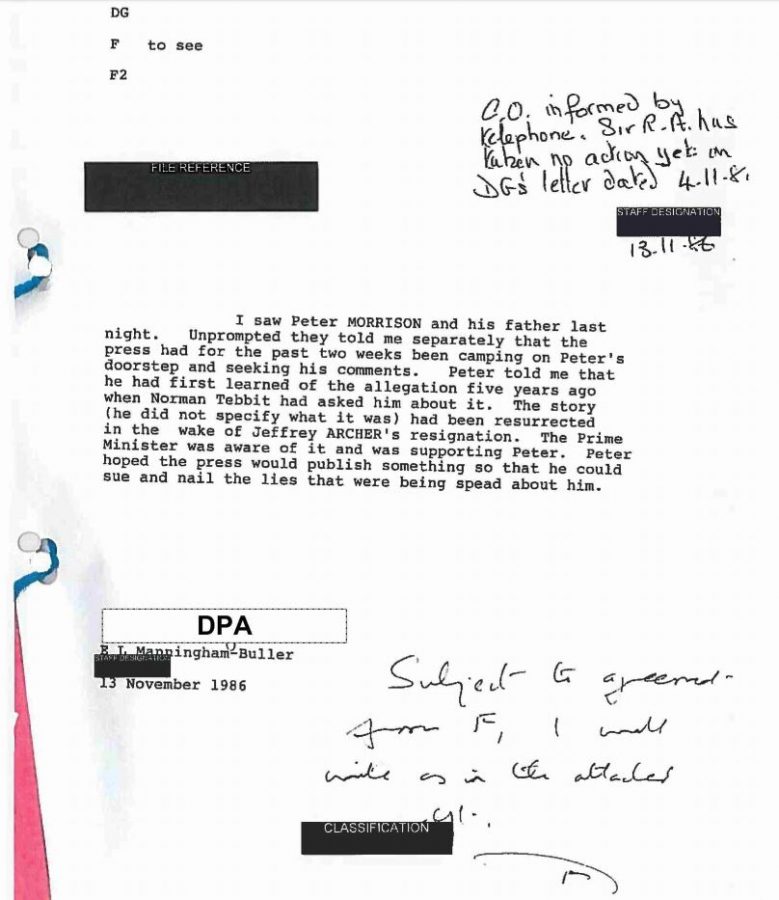 The memo also mentions his conversation with another member of Margaret Thatcher’s cabinet, Sir Norman Tebbit – a conversation Tebbit referred to shockingly on the BBC’s Marr show years later. When asked if there was a “big political cover up” at the time, the former Chairman of the Conservative Party replied: “you didn’t talk about those things.”


Lord Tebbit has been asked by the inquiry what he knew about Sir Peter Morrison, after reports emerged that an investigating police officer visited Norman Tebbit to warn him about allegations involving boys.

Lord Tebbit’s statement to the investigations said that he thought the police officer was referring to boys of “Sixth Form age.”

A statement read out by Lord Tebbit said that he was aware of “several decades of allegations of Westminster child abuse and cover ups.”

Last week we also reported how the inquiry heard an extract from former Tory MP Edwina Currie’s diary for July 24 1990 (published in 2002).

“One appointment in the recent reshuffle has attracted a lot of gossip and could be very dangerous: Peter Morrison has become the PM’s PPS. Now he’s what they call ‘a noted pederast’, with a liking for young boys; he admitted as much to Norman Tebbit when he became deputy chairman of the party, but added, ‘However, I’m very discreet’ – and he must be! She either knows and is taking a chance, or doesn’t; either way it is a really dumb move. Teresa Gorman told me this evening (in a taxi coming back from a drinks party at the BBC) that she inherited Morrison’s (woman) agent, who claimed to have been offered money to keep quiet about his activities. It scares me, as all the press know, and as we get closer to the election someone is going to make trouble, very close to her indeed.”

Asked to explain the entry by the inquiry, Currie said she was worried about the reputational damage consorting with underage boys by her Parliamentary Private Secretary would cause to Thatcher.

She added that she could not explain whether and how Morrison was protected from prosecution, and that it would have been wrong.

The police never questioned Morrison about the allegations against him.

But neither did the Conservative Party.

Former MI5 chief Baroness Manningham-Buller wrote in another memo that Morrison was suspected by the press of being a “prominent Tory [who] was under investigation by the police because of his interest in small boys”.

The inquiry heard how Sir Antony Duff advised that the risk of political embarrassment was greater than the security risk to the country, and so no action was taken.

-Despite the potential of risk to any children

In 1987, MI5 advised Morrison to “be on his guard . . . against behaviour which, however innocent, could be misrepresented” and he was warned that “as a public figure he needed to choose his friends with care”.

Lord Armstrong was called to answer questions at today’s IICSA hearing. He told the inquiry that Margaret Thatcher did not think it necessary to have her key ally quizzed over the serious claims against him.

He said if Peter Morrison had been a government minister in a “sensitive” department such as defence or the foreign office, it would have been a “serious matter to think about”.

But the protection of the children concerned clearly were not a factor in the government’s decision.

Inquiry counsel Brian Altman QC asked Lord Armstrong: “to the suggestion that this was all just a cover-up of Peter Morrison, and his activities by the political establishment in particular, what would you say?”

Lord Armstrong replied: “I was certainly not aware of any cover-up, and Peter Morrison had emphatically denied the truth of any of this stuff, and had said that he would sue if any publication was made.”

“But that was to accept Peter Morrison’s word, and take it on trust, wasn’t it?” asked Brian Altman.

Lord Armstrong replied: “That appears to be what the Conservative party did.”

“If looking at matters another way Lord Armstrong,” continued the Inquiry counsel, “the allegations were true, not merely that he had a penchant for small boys, but that he was putting into practice his sexual preferences, there were children who were at risk. Do you agree?”

“If that were so it would be true,” replied the Tory peer. 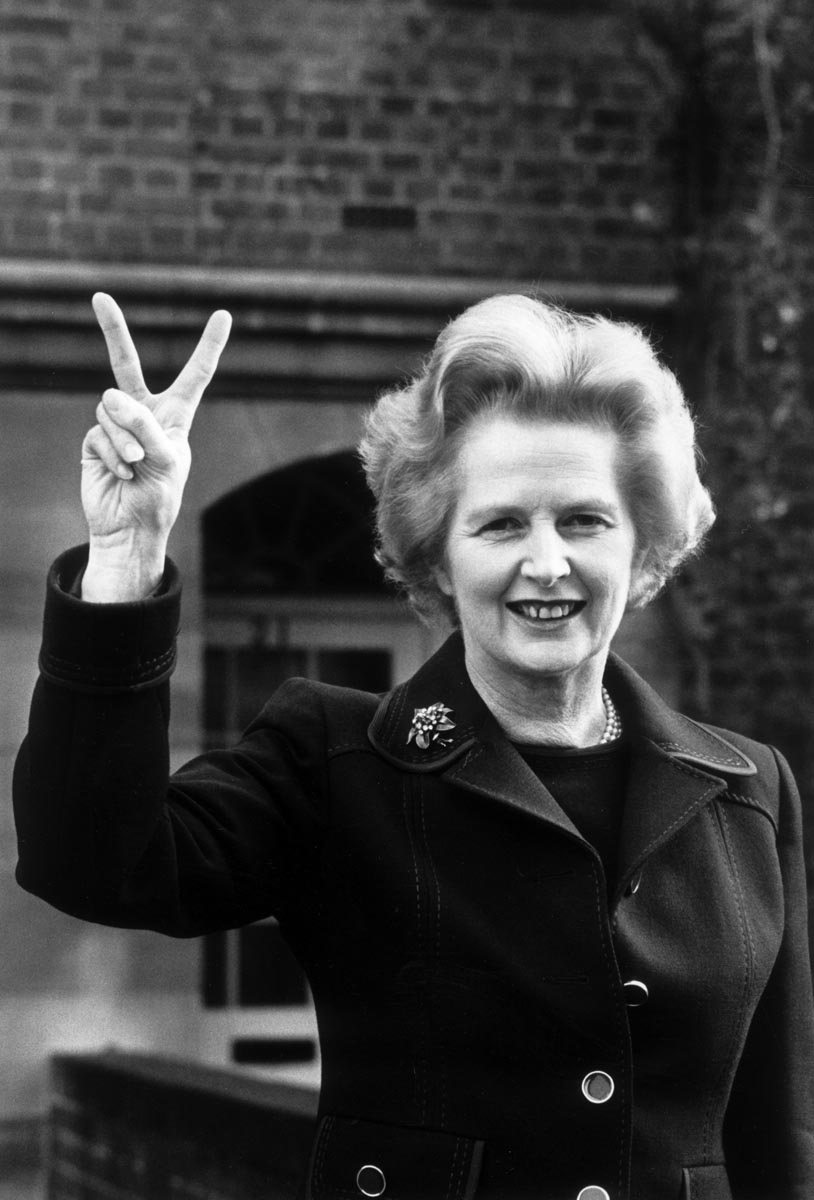 How many times is David icke going to be proven right and yet everyone still considers him a nut job
People say they all want the truth, but when they are confronted with a truth that disagrees with them, they balk at it as if it were an unwanted zombie apocalypse come to destroy civilization.

So this Epstein thing is exploding now.

MSM, strangely, is all over it.

They wouldn't say shit when we connected Epstein with the Clintons, called us conspiracy theorists. But now as fodder for the Trump Derangement Syndrome victims its making headline news?

What is happening??? something is not right


Who's got the guts

Canuckster wrote:How many times is David icke going to be proven right and yet everyone still considers him a nut job


Infinitely. He was recently banned from Australia for being a "Holocaust denier" and an "anti-Semite". Both of which are complete bullshit, but try and tell that to Joe Average. As long as the media continues to ridicule him, no one will take him seriously.

It's a real shame that he ever talked about reptilians. It gives the media the ammunition they need to assassinate his character with.

Might be the only thing keeping him alive
People say they all want the truth, but when they are confronted with a truth that disagrees with them, they balk at it as if it were an unwanted zombie apocalypse come to destroy civilization.

MSM has historically and consistently defended/ignored Epstein and anything Pedogate related like the plague...

That is the biggest question. What is so worth it to them (Acosta?) as to risk this whole can of worms??

Super interesting developments, I will keep an eye on this one for sure.