No no.. marble doesn't change color

What am I thinking of? Bronze?

On the tops of a lot of canadian parliaments they make these copper/bronze color roofs and then they turn green with time. I thought this was oxidization or something but I'm no chemist. Anyways it looks like the same color.

Kind of beside the point though, I don't see the materials used as anything significant

Just think its silly that everyone involved in the project totally side-steps the fact of what it actually is they put up, and no one has the sense to ask lol

copper patinas into green. i gotta stop posting from my phone.....
People say they all want the truth, but when they are confronted with a truth that disagrees with them, they balk at it as if it were an unwanted zombie apocalypse come to destroy civilization.

youre right the wrap is copper, which turns green, on my phone it looked like the interior of the marble at city hall, dude, i cant even fathom what that place cost to build at the taxpayers expense to satisfy some masons fancy.


you should check it out one day
People say they all want the truth, but when they are confronted with a truth that disagrees with them, they balk at it as if it were an unwanted zombie apocalypse come to destroy civilization.

I have seen a few of these in person , Paris, Buenos Airies , London . The one in London is interesting as the Lions should be facing out to protect it but they face inwards!

A mini-version of the Washington Monument obelisk was found underground in a manhole right nearby the main one.

Weird! What twisted symbolism is this about?

Unknown to most passersby, there’s a 12-foot-tall replica of the Washington Monument under a manhole near the actual monument. Officially known as “Bench Mark A,” this underground oddity is actually a Geodetic Control Point that’s used by surveyors. It’s part of the network of a million control points across the country that helps the National Geodetic Survey (NGS) synchronize all of the government’s maps. According to NGS modernization manager Dru Smith, “Geodetic control points provide starting points for any map or measurement. It has to be more accurate than any measurement you do on top of it, so we pick things that tend to be extremely stable.”

Usually that means metal caps or rods that are driven down into the ground, but this quirky control point mirrors the form of its next-door neighbor. “All the surveys we’ve done, going back to the early 1900s, have used it,” says Smith. Most recently, it was used in the aftermath of the 2011 Washington earthquake. Measurements over the past century have shown that the Washington Monument has sunk 6.2 cm into the marshy soil below, at an average rate of 0.5 mm per year.

The mini monument was placed in the 1880s as a part of a trans-continental leveling program. The ground level here was much lower at that time, with large parts of the Washington Monument foundation still visible above ground (see fourth image above). The mini monument was above ground for a time, before being encased in a brick chimney and buried. Outside of surveying circles, it’s been largely forgotten.

The foundation of the Obelisk appears to be standing on un-capped PYRAMIDS: 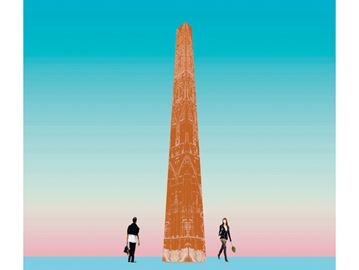 Leslieville will soon be getting a unique public art feature: a 9.2-metre tall obelisk by internationally-acclaimed Toronto artist/designer Pierre Poussin.

The iconic piece, which will be placed in the Carlaw-Dundas triangle, a City-owned open space west of Carlaw Avenue, north of Dundas Street East, and south of Dickens Street, be will be the centerpiece of the Carlaw + Dundas Community Initiative project.

A design competition was recently held to select a Signature Marker, a vertical streetscape element that can be seen from all directions and embodies the industrial character and vibrancy of the district.

"The jury was captivated by Pierre's creativity and thoughtful expression of the site," said jury chair Catherine Williams, a public art consultant, in an October 6 release.

"We had excellent submissions but Pierre's was a clear winner and we look forward to seeing the final design and construction."

Like the triangular park it will soon call home, the marker is a three-sided pyramid. Its shape aims to point to the smokestacks of the industrial period of the neighbourhood.

The plan is to light the obelisk from the inside with LED lights.

Installation is set for 2018 after environmental remediation is completed at this site.

"This is an exciting moment for the Carlaw and Dundas neighbourhood, our ward and the city," Ward 30 Councillor Paula Fletcher said in the release.

"Pierre Poussin's obelisk marker will become an iconic entrance feature to the neighbourhood. His wonderful design speaks to the industrial character and vibrancy of this neighbourhood and also our great city."

Poussin’s work, which is currently on display at Toronto's Underpass Park, has been featured at the Vancouver 2010 Winter Olympic and Paralympic Games. A graduate of the furniture design program at Sheridan College Institute of Technology and Advanced Learning, he has also worked with the Peace Bridge Authority of Fort Erie and Buffalo, Princeton University and the Walt Disney Corporation among others.

Back in 2014, Toronto City Council approved the $750,000 Carlaw + Dundas Community Initiative project, which is being managed by City Planning, Parks, Forestry and Recreation, Transportation Services, and consultants Schollen and Company. It will involve a number of public realm improvements throughout the community including in Jimmie Simpson Park, Badgerow Parkette, on Boston Avenue, and the Carlaw-Dundas triangle.

Final design and construction is set to begin next year and is expected to be completed in 2018.

"This project is a good example of various City divisions and community stakeholders working together to improve our common grounds," Ward 35 Councillor Michelle Holland, the chair of the Parks and Environment Committee, said in the communiqué.

More details on the Signature Marker and surrounding landscape design will be presented at an open house in November.

Visit http://www.carlawdundas.ca for more information.
People say they all want the truth, but when they are confronted with a truth that disagrees with them, they balk at it as if it were an unwanted zombie apocalypse come to destroy civilization.

Its the same as when they put the obelisk up in my town here in Burlington... everyone skirts around the issue celebrating it as an 'art installation' but nobody dares actually address wtf it is.

-"The jury was captivated by Pierre's creativity and thoughtful expression of the site,"
creativity?

-"We had excellent submissions but Pierre's was a clear winner and we look forward to seeing the final design and construction."
clear winner, lol

-"His wonderful design speaks to the industrial character and vibrancy of this neighbourhood and also our great city."
Does it now?


lets all pretend not to see the elephant

bow down to your god baphomet plebe
People say they all want the truth, but when they are confronted with a truth that disagrees with them, they balk at it as if it were an unwanted zombie apocalypse come to destroy civilization.

lol, I am tweeting with the Mayor of my city regarding the Obelisk that was put up a few years ago in our town:
(didn't have the heart to comment on his spelling

Once again, they talk about it as 'art', but dare not admit what it is, never actually using the word 'Obelisk' even though its there right in front of all to see... Like making a sculpture of an elephant, but pretending its not an elephant, nor allowing one's self to use the word 'elephant' to describe it lol

Wonder if he knows but won't say, or if he really naively thinks its just someone's 'art'. Mayors can be funny that way What a load of shit.
People say they all want the truth, but when they are confronted with a truth that disagrees with them, they balk at it as if it were an unwanted zombie apocalypse come to destroy civilization.
Post Reply
88 posts

Users browsing this forum: No registered users and 15 guests