I use LinkedIn professionally and its shocking to see how many professionals are all hanging off the covid nutsack, embracing the 'new normal' and trying to spin it in a positive way. Very little dissent or even skepticism to the official narrative/trend

There is one dude however that is rocking the boat several times a day. He's got a pretty hefty job title, Publicis is a pretty big marketing giant. Honestly I don't really understand how Publicis can let this guy go off every day lol I imagine he'll be fired soon or will have to make a public apology or something 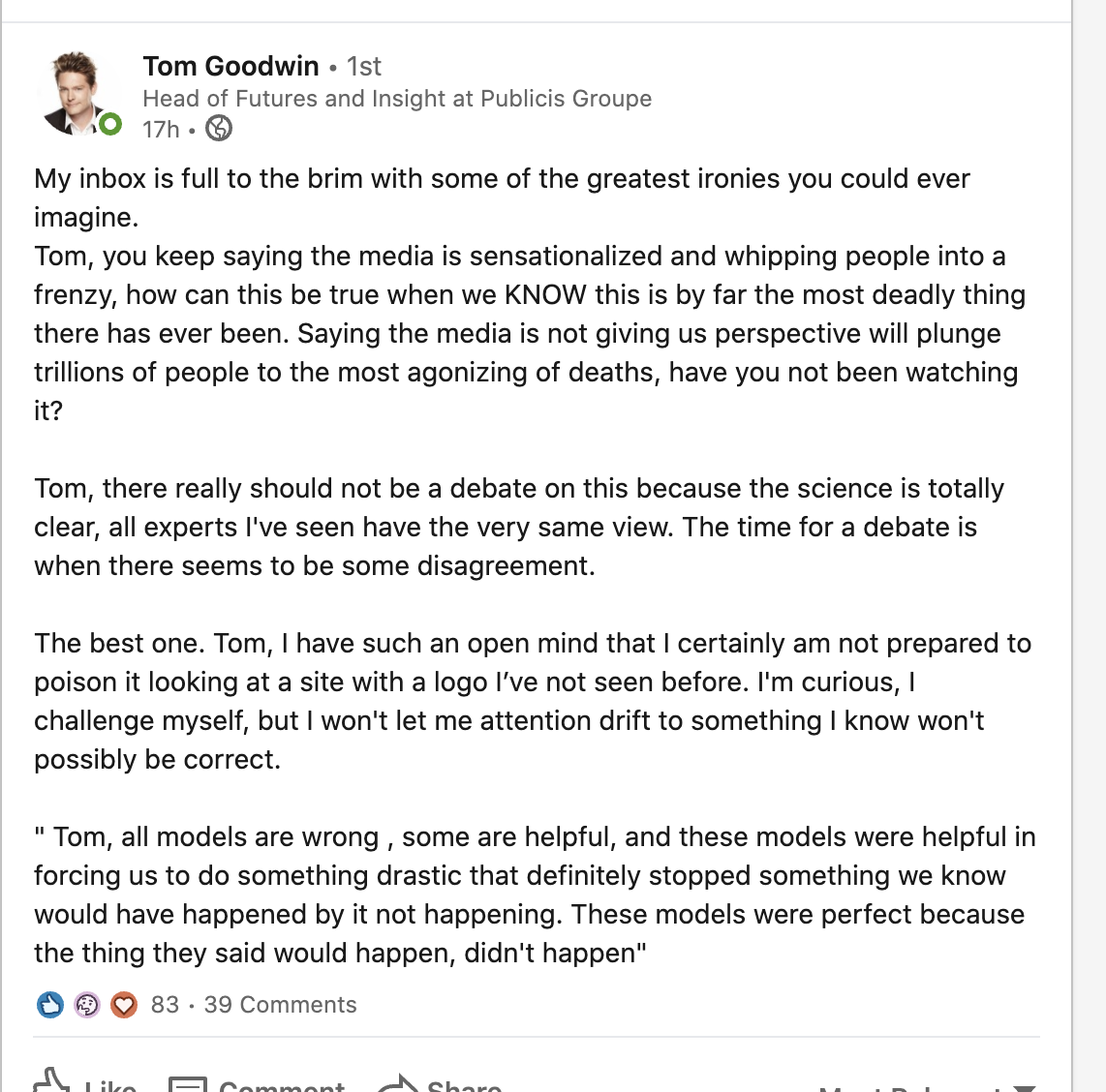 Brazil is making a bold move to take over second place behind the USA in the rona sweepstakes, Bolsanaro's disease game is on point. The big dog wants to eat now, look out


RIO DE JANEIRO (Reuters) - "Brazil’s daily death toll from the new coronavirus jumped to a record 1,179 on Tuesday as President Jair Bolsonaro doubled down on chloroquine as a possible remedy and U.S. leader Donald Trump said he is considering a travel ban from Brazil.

The highest daily toll before Tuesday had been 881 deaths on May 12. The pandemic has killed at least 17,971 people in Brazil, according to the Health Ministry.

Brazil overtook Britain on Monday to become the country with the third-highest number of confirmed infections, behind Russia and the United States. Brazil’s confirmed cases also jumped by a record 17,408 on Tuesday, for a total of 271,628 people who have tested positive for the virus."

Megaterio Llamas wrote:Brazil is making a bold move to take over second place behind the USA in the rona sweepstakes, Bolsanaro's disease game is on point. The big dog wants to eat now, look out


RIO DE JANEIRO (Reuters) - "Brazil’s daily death toll from the new coronavirus jumped to a record 1,179 on Tuesday as President Jair Bolsonaro doubled down on chloroquine as a possible remedy and U.S. leader Donald Trump said he is considering a travel ban from Brazil.

The highest daily toll before Tuesday had been 881 deaths on May 12. The pandemic has killed at least 17,971 people in Brazil, according to the Health Ministry.

Brazil overtook Britain on Monday to become the country with the third-highest number of confirmed infections, behind Russia and the United States. Brazil’s confirmed cases also jumped by a record 17,408 on Tuesday, for a total of 271,628 people who have tested positive for the virus."

Interesting. I live with Brazilians and am getting some conflicting news...

I wonder how many of those deaths have been inflated as in other countries? How many deaths have been chalked up to covid when they didn't really die of covid? I've seen a huge problem with hospitals marking up death certificates to say people died FROM covid when the truth is that they died WITH covid. Other countries have been caught admitting that even if a patient has covid-like SYMPTOMS but not actually confirmed, they write down covid as cause of death.

I've seen so much of this its really hard to trust the numbers when the media starts scare-mongering again.

Also its important to keep in mind that Brazil right now is in a similar state to the US where the mainstream news and media giants have for whatever reason picked a side that is absolutely against the President, and are working harder to discredit and slander the President than they are to give any sort of accurate reporting anymore. Its like CNN and Trump, they've jumped the shark. So, if Bolsonaro for example is taking a pro-economy stance over a pro-lockdown stance, you can be 1000% sure that GLOBO (the Brazilian CNN) will do everything they can to make that look as disastrous as possible.

I'm not saying covid is not causing damage in Brazil, I'm saying that the news there is all fucked up too and the same 'media vs govt' script seems to be playing out there too, which imho makes any info coming from there anyone's guess as to how truthful it is.

Also nearly ZERO coverage of the deaths and impacts of lockdown. Majority of Brazil's massive population is living day-to-day, poverty is already rampant, many people hanging by a thread to survive. Any sort of lockdown will SURELY have a massively negative effect, even causing deaths and suicides, not to mention total economic disaster and panic for millions. Who is reporting on that?

The whole issue is a very big ethical, socio-economic, medical, scientific, and cultural debate. Yet the media has chosen to stay absolutely on one side of that fence, ignore any voices from the other direction, and thus have destroyed any possibility for a proper debate, for proper information, for unbiased reporting. The media has fucked this up WAY worse than needed, and continues to make it worse.

I'm just looking at the numbers Masato, and I think if anything the deaths are under counted because people are dying off of the grid down there. And it's now moving up the Amazon and infecting indigenous tribes. That tool Bolsonaro fucked up and a shit ton of people are going to die because of it.

I think Brazil needs a better Latin American strongman than that weak tit. A colonel at least, preferably a general. He's only a captain ffs!

Where is Alfredo Stroessner when you need him

From what I hear from my brazilian family it really is a mirror of Trump in the US:

Half the people think he is the biggest joke and disaster ever, and the other half support him like Trump fans, are cheering him for putting the economy first. Its so similar I can't help wonder if there is some connection or re-dux script Brasil is following

I think the truth is like Benwahwah said recently, people in those positions like Trump or Bolsonaro are fucked either way, there will be casualties no matter what choice they make on the matter. Take one way or another and the deaths and suffering will be counted.

I think it's greatly a class thing in Brazil, different levels see life and the issue differently. Brazil is diverse and not afraid to voice their controversy in one big soup, it's interesting. Sucks the media is so partisan.

Who is the second guy with the red sash?
I will look up Alfredo Stroessner

"With his father on life support in a Moscow hospital following a coronavirus diagnosis, Khabib Nurmagomedov does not have the patience to deal with COVID-19 deniers.

The UFC lightweight champion, who himself is trapped in Russia, has been responding to people on social media who claim that the coronavirus is little more than a hoax.

“In my village more than 500 people fell ill with pneumonia at once. 11 died and dozens more people were in the hospital from my village. In a neighbouring village, 14 people died during the night and there wasn’t enough time to bury them.

Nurmagomedov’s latest comments come shortly after the lightweight champion took to Instagram Live to confirm his father’s dire situation. “He’s in the hospital now, he’s in a very serious condition. He had heart complications stemming from the virus. This virus has very seriously affected his heart, since he had a heart operation a year ago,” Khabib said (h/t RT Sports). “He’s had surgery again. He’s in a difficult situation, very difficult. We ask Allah to return him to us. Thank you very much to everyone who writes, who sends their support. May Allah help us all.”

Abdulmanap Nurmagomedov, 57, was transported from his native Dagestan to a military hospital in Moscow several weeks ago after falling ill with pneumonia and flu-like symptoms, which was later confirmed to be COVID-19. As his condition worsened, the renowned coach suffered a stroke and underwent surgery before being placed in a medically induced coma. And despite waking from the coma a week later, he was reportedly unable to speak and remained in critical condition.

Then on Tuesday, Russian media reported that Abdulmanap had been placed on life support after his condition worsened significantly. He remains unconscious and is unable to breathe without medical support.

Russia has over 300,000 confirmed cases of COVID-19, including 2813 death. However, Dagestan has also emerged as the nation’s coronavirus hotspot after the republic’s ministry of health revealed figures that far surpassed Moscow’s estimates, claiming that the total number of people infected with coronavirus and community-acquired pneumonia in Dagestan exceeded 13,000, with 657 dead."

Users browsing this forum: No registered users and 13 guests